Ozone Therapy in our Dental Practice 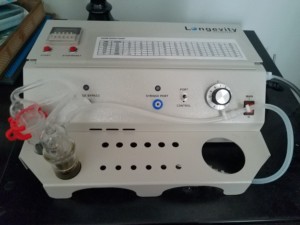 Ozone’s been in use since the mid 1800’s in medicine. We, in dentistry, have been using it for about the last 80 years.

We have an ozone generator. If you’ve ever been out in a thunderstorm where there’s some lightning, sometimes you’ll smell a very clean smell. That’s Ozone. What happens is the oxygen molecule, which is O2, when it’s charged with electricity breaks up into just single oxygen atoms and 3 of them form together. That’s Ozone.

The device we have feeds pure oxygen through a tube. There are 2 other tubes that generate an electrical charge and the oxygen, as it passes through it then becomes Ozone. Ozone converts back to oxygen fairly quickly when just sitting by itself.

Ozone kills, basically, the bad bacteria, virus particles, fungus, and parasites. The way it does that, with a very simplified explanation, is that the ozone attaches to the wall of the cell of a disease cell, or a virus. That cell (of the virus) doesn’t have a chemical that can deal with ozone and so the ozone kills it.

Healthy cells do have the right chemical in their cell wall so that it converts the ozone (which is O3) back to oxygen which is O2 which our cells need. It’s beneficial to healthy cells, but it kills the bad cells.

Ozone has lots of applications in our dental office. We use it for non-surgical gum treatments. Any kind of gum infections we treat with ozone, as well. It is our standard protocol for treating gum disease.

We use it for caries arrest, which means if we have a tooth that has a cavity, we remove the cavity, but we also then flood the interior where the cavity was with ozone gas so that it disinfects the surface of the tooth and stops any decay process that we can’t see.

We use ozone gas to desensitize teeth. Many people have sensitivity on the side of their teeth right at the gum line. Ozone works wonderfully for that. Sometimes it takes 1 or 2 appointments and the sensitivity goes away.

We have a lot of patients that come in and have root canals and are concerned about their health after the root canal. In most cases, we can do a little ozone treatment around the tooth and kill all the existing bacteria, fungus, virus, parasites, all the kinds of things that hide around the root of the tooth following an infection.

Take a tour of our office!